Annapurna Circuit Trek and Tour are classic Guided treks through Pokhara with the view of Fishtail, Manaslu, Annapurna I/II and Thorong (Thorung) La Pass by Nepal Trekking for 2018. 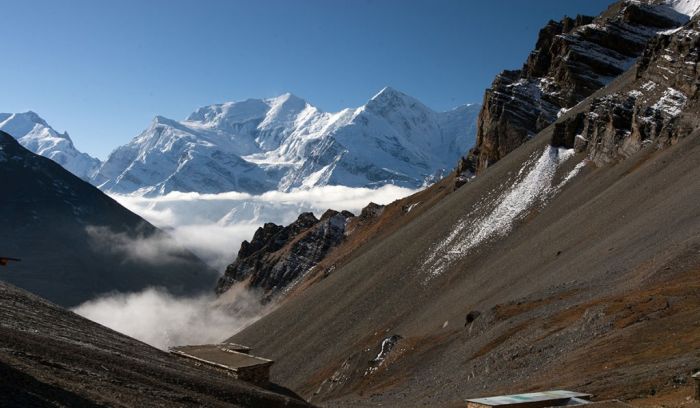 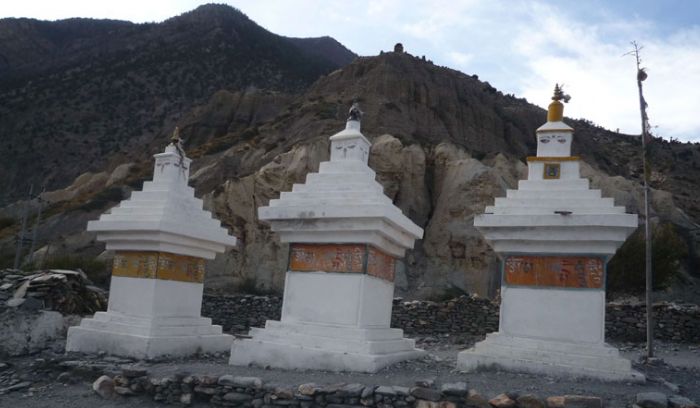 Chorten near Manang- on the way to throng la pass 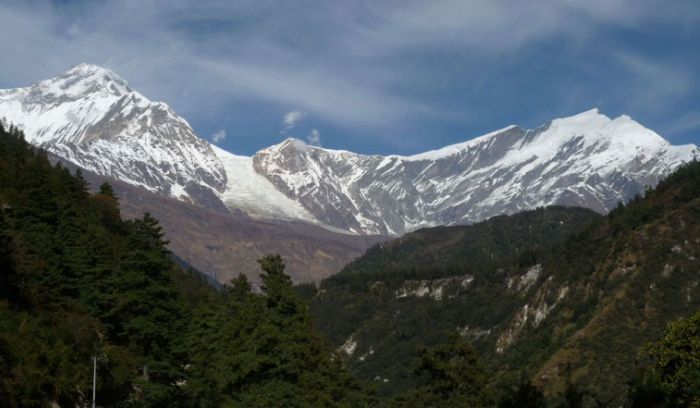 Mountain view from Pisang- on the way to Manang 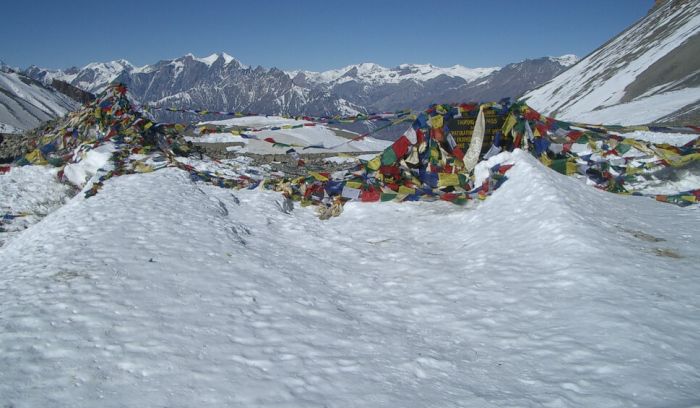 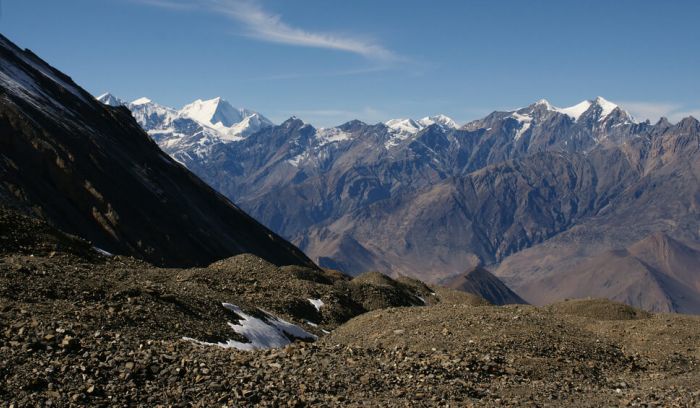 Annapurna Circuit Trek is counted as the best option for it bestows the most breathtaking trekking experience in Annapurna region. Annapurna region certainly is an awe-inspiring spot in Nepal which will reward you with the sequence of amazingly elevated peaks. Most of all, the superb views of Manaslu, Annapurna South Face, Fishtail peak (Machhapuchhre), Dhaulagiri, Hiunchuli, Tarke Kang and more will entirely hypnotize you during the trek Annapurna Circuit Trek.

Annapurna Circuit Trek, popular as a classic trek in the world will let you experience the vista of worlds tenth tallest peak, the Annapurna. During the Trek, we will reach to the Thorung La Pass (5,416m) which is the maximum point of the trek. The adventure of trekking all the way through Kali Gandaki Gorge which is the world’s deepest gorge is just awesome experience. Also, visiting Muktinath temple will be one of the awesome experiences. The sacred holy place has 108 waterfalls that people believe flows holy water and puzzling natural gas fires. From here it is downward to Jomsom lying on the Tibetan upland where you can look around at the entrance to the "Forbidden Kingdom of Mustang", and get a glance of the very long-established traditions still followed.

Plus, on the way, you will be accompanied by the Annapurna I from the east lying at an elevation of 8091m and Dhaulagiri towering at 8167m to the west. En route, we will pass through an assorted geographical and traditional variation with a remarkable range of floras and faunas as well. Autumn and spring are the best seasons to go for the Annapurna Circuit Trek.

Day 15:Departure to Airport and Fly Back to Home. (B)

Services not includes are:

We also organize private trips, small group trips rather than just group join trips, if you wish to have your own private trip or customize trip, contact us! We will assist you.

Join us now for "journey of once in a lifetime" the great adventures are waiting for you and family.

Available: This date is available and open for bookings. This trip is Available to depart. Go for it!

Closed: This date is available and open for bookings. This trip is Closed to depart. Go for it!

Guaranteed: This date is available and open for bookings. This trip is guaranteed to depart. Go for it!

Private Journey - Customize the Suitable Date for You

Please advice your travel plan with number of travellers in your group to customize your own date of travel and for tailored made Itinerary.

Tailor Made Journey - Itinerary Personalized According to Your Specifications

Yes, it is possible! We are flexible and fully helpful. We are happy to make a perfect trip Package that meet your personal interest and travel requirements.E-mail us with your suitable travel requirements and we will design a new tailored made Journey to you.

Why our Trekking Service is different than other Companies??

Our company is always concern in below 3 quality service during your trek in Nepal with us. 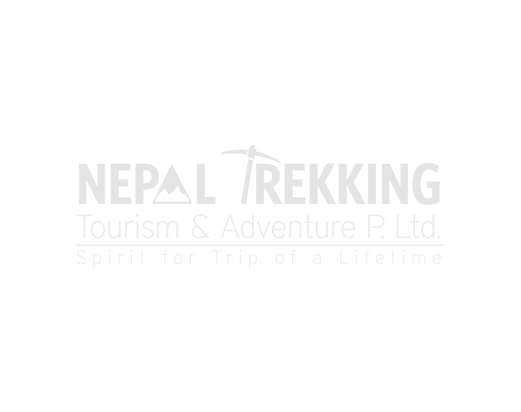 Outstanding trip in April 2018 with excellent service which is my 2nd year with Nepaltrekkingtourism,I really enjoyed association with Nepal trekking tourism,They are best.

“To Whom It May Concern”

My Trek Around Annapurna June 2006 Was a Total Success. Everything went According to Plan with No problems. Nepal at this time of year provides a Wonderful Experience and lush Green Mountain Sides.

The Guide and Porter Were Knowledgeable and Patient. Answering all my questions as we trekked through the richness of Nepal. Being the So- Called Off season we didn’t run into huge crowds and people were more relaxed. The few other combine we came across were Delightful .The Overall Experience was safe and Positive. The Trekking was beyond my dreams. The Memories too will always treasurer.

Further, I am very much pleased to tell all my friends to use your agency for Professional and reasonable Himalayan trekking.

Thank you for the New Years wish from your company. I apologize for being so late in writing you today. I had meant to do it two months ago as soon as I returned from Nepal but I got busy and forgetful!

Anyway I was part of the all women trek on the Annapurna Circuit (Linda Wohlgemuths group). I have written to Dolma to say thanks and I wanted to also say thank you to you for providing us with a really excellent trip and giving us wonderful memories. The trip went off without a hitch. Pasang Dolma was the perfect guide for us and we enjoyed her greatly. I was very appreciative of the how she was able to manage our wants with our needs with a firm yet humorous tone. She made the trip for me. I enjoyed meeting everyone in your company you were all kind and professional. You have much to be proud of. You have a good family company and country to be very proud of. I was fortunate to meet many wonderful people on our trip and though I can’t thank everyone I can start with you.

I just wanted to tell you how much I enjoyed my trip to Nepal. Thank you for assigning Dolma as our guide. We were all delighted to have a woman guide. Dolma has excellent organizational and leadership skills. She was not only a terrific guide she became a friend too. She handled all of our requests very well and made arrangements for a bus at our request and made many suggestions that were very helpful. Dolma must be one of your best guides!

We also liked Kaji very much. He is a very good cook and provided us with delicious meals. He was also concerned for our health and our happiness. And he did many things to help make the trip really fun for all of us. We enjoyed his company and his skills very much. I told him that he was the best cook in Nepal and I believe it!

We thought that all of the staff were terrific. Each person contributed to a memorable and enjoyable trip for us all.

Overall the trip was wonderful and I look forward to sharing my stories and photos with other Americans who may want to use your services.

If you are looking for an absolutely fantastic team look no further than Nepal Trekking Tourism & Adventure. Pasang, Sumba, Dolma and Nima offered impeccable service hospitality and knowledge.

The 14 days I spent in Nepal with this wonderful group of people will always be remembered as a trip of a lifetime.

Whether it was rummaging through the first aid kit to help patch up a young child in Ghasa, sipping Raksi (Local wine) with a half-dozen Sherpas in Jomsom, spotting a mama monkey and her newborn in a tree on the shore of Fewa Lake, touching the clear water of 108 sacred fountains at Muktinath, or watching the sun set from the World Peace Pagoda in Pokhara, these fine Sherpas made sure that my adventure was enjoyable safe and inspiring.

I will definitely work with Nepal Trekking Tourism & Adventure (NTTA) on my next trip to the region.

Being an experienced and trained mountain trekker it did not help me at all when it came to planning to go to Nepal after twenty two long years and that too through an agency for the first time. I could not help but being uncertain and skeptic.

Plan was to go for Annapurna Parikrama: Muktinath via Thorung La trek in early September 2009. I did not know Mr. Pasang Sherpa and his company before I found them on the web. But from the very first contact it was a different experience. I found him honest, transparent, and punctual and always giving priority to our angle of view. All my queries and quizzes were promptly and accurately answered, without any hidden agenda. He quoted rates much lower than the other offers, without compromising anything. Even the advance payments were uncomplicated and absolutely safe. My uncertainty and skepticism were already waning even before we started trek.

From the moment we landed in Nepal and till we left seventeen days later, we were well looked after, everything was as promised and superbly arranged and well executed. Uncertainty and skepticism were slowly but surely replaced with utter loyalty and blind dependence. Our guide-cum-porter Mingmar Sherpa was a gem of a companion. He was knowledgeable about the terrain and the route, ever smiling, extremely enthusiastic and hard working. Our well being and satisfaction was his concern for all his awake moments. He literally forced us to some unthought-of luxuries in a mountain trek and we felt pampered all the way.

Annapurna Circuit: Muktinath via Thorung La is already known to be one of the best treks of the world, it was tailor made even better for us. Nepal after twenty two years has not only given me another unforgettable mountain experience but a few more friends for life, whom I will always cherish to reunite. Sooner or later and sooner the better.

I will definitely give a FIVE STAR recommendation to Pasang and his company for anyone wishing to visit Nepal for a trek or even a joy trip. Please do contact me for further information, queries or genuineness of this recommendation. 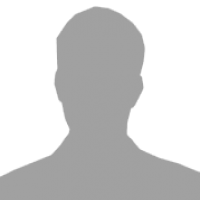 My wife and I and our two adult children travelled for a month in Nepal with Nepal Trekking Tourism in the fall of 2008. It was the holiday of a lifetime. Once we had decided to go with Nepal Trekking Tourism & Adventure (NTTA) all our questions and concerns were responded to by Pasang with dispatch. They seemed very professional and they proved to be that and more. We were treated like kings like visiting dignitary. Family could not have treated us better. Upon our arrival we were garlanded with marigolds upon our departure silk scarves were draped around our necks. Private mini-buses took us to and from our various connections (we trekked the Annapurna Circuit visited Beni Pokhara and the Chitwan Jungle Reserve). And when we decided to alter our plans somewhat the necessary bus tickets were delivered to our hotel door. We hired a guide and two porters who became like family. Our well-being and satisfaction was their daily concern. When we had a minor problem we just said to Dorji our guide what can we do about this? And he would make the necessary arrangements. It was worry-free travel. A five-star recommendation.

Enjoy the Luxury trip with us

Get a trip details

(all trips available are quoted at best prices)